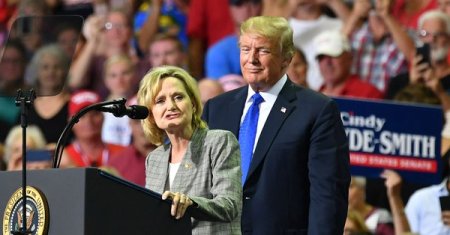 You know, you really have to hand it to Cindy Hyde-Smith, the Mississippi Repug running against Mike Espy for the U.S. Senate (the runoff election is this Tuesday, just to let you know – more here). The seat was opened by the retirement of Repug U.S. Senator Thad Cochran.

As you can see, she’s definitely a trend setter when it comes to wearing insurgent apparel (here). Which of course is not the least bit surprising when you discover that both she and her daughter have attended segregationist high schools in their state (here). Oh, and as we know by now also, she’s definitely a fan of voter suppression (here).

It is likely that Hyde-Smith could have cruised to winning a U.S. Senate seat, running a relatively under-the-radar campaign against Espy. And of course, she may yet win anyway, though we should do all we can to oppose that of course. The problems for her began with that incautious little remark about attending a public hanging (here).

This dovetails a bit into the fact that she takes campaign contributions from white supremacists, as noted here – and I never liked the San Francisco Giants anyway, and here is more of a reason for that as far as I’m concerned, though as noted here, some corporations are withdrawing their support for her, but not Google apparently, as noted here.

All of this, to me, is kind of a hoot when you consider, as the New York Times reported here, that Smith wasn’t even a Republican until 2010 (here) and was considered more of a middle-of-the-road alternative to Teahadist wingnut Chris McDaniel.

And as for Repug Governor Phil Bryant (he of the black abortion genocide nonsense), let’s not forget that he crippled health care insurance in his state by rejecting federal dollars for Medicaid expansion in 2013, as noted here (I believe the name of the program was “One Mississippi,” which I thought was kind of clever).

Also, I’d like Hyde-Smith to explain to me how her position here benefits law enforcement in any way. And this tells us about her performance in the most recent debate with Espy, including giving the wrong date for the runoff election. No wonder she didn’t want press to attend (here).

This, to me, is what happens when you allow Republicans to run your state like their own personal playground year after year, decade after decade. And I haven’t even said anything yet about the other Republican Senator Roger Wicker (here), Governor Phil Bryant (here), or former Senator Thad Cochran (and I’m sorry, but this represents one of the stupidest moves I’ve ever seen by Democrats…I mean, they could have actually supported someone from their own party that year named Travis Childers, but Cochran was supposed to be more moderate than McDaniel). And if I wanted to really give former Bushco insider and MI governor Haley Barbour the treatment he deserved, I’d need a whole other post (here).

With all of this in mind, I’d like to note that Mississippi is rated Number 48 for child well-being (moving up from last – yaaay! And yes, I’m being sarcastic.) but the state still the highest poverty rate among all others, as noted here. Also, Mississippi has the lowest income rate, as noted here. It also lags behind in developmental screenings for kids, as noted here. And it has the nation’s highest cardiovascular death rate in 2017 and the second-highest rate of cancer deaths (here). Also, syphilis is apparently making a comeback too (here). And as if all of that isn’t enough, it is 4th per capita in gun deaths – you REALLY think that all of this will change with ANOTHER Republican (here)?

You want to do something about all of this? Good!

And in conclusion, I think we should keep this in mind from The Rev. Dr. William Barber above all else. 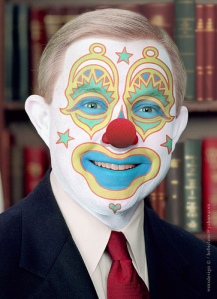