As noted here from last Friday…

WASHINGTON — House Republicans plan a 40th attempt at repealing Obamacare (this) week, with legislation that would block the Internal Revenue Service from enforcing or implementing any portion of the health care reform law.

House Republicans have scheduled a vote next Friday on Rep. Tom Price’s (R-Ga.) Keep the IRS Off Your Health Care Act of 2013.

“Public distrust continues of agency that has dozens of powers under Obamacare, and whose actions President Obama has called outrageous,” said Doug Heye, spokesman for House Majority Leader Eric Cantor (R-Va.). “As an ever increasing number of Americans — including labor unions and moderate Democrats — worry that Obamacare has become a nightmare, it is critical to prevent the IRS from implementing any portion of the law.”

“It is only fitting that Republicans would waste the last week at work this summer voting for the 40th time to repeal the Affordable Care Act and continue their record of no jobs bills, no budget agreement, and no solutions for the middle class,” said Pelosi.

“Every day wasted on yet another repeal bill that will never be taken up by the Senate, much less survive a presidential veto, is another day that could have been spent advancing legislation to create jobs for the middle class, negotiating a balanced and bipartisan approach to deficits that can end the painful budget sequester, or debating a path forward on immigration reform,” added Hoyer.

Yep, that about says it as far as I’m concerned.

I should point out that, when I first became aware of the full extent of the stupidity in the U.S. House on this issue (scheduling repeal votes when, as noted in the Ezra Klein clip from here, health care reform is a “done deal”), they had only scheduled 31 repeal votes. And in response, I put together a series of posts from here focusing on 31 Republican U.S. House members who opposed health care reform (including our own Mikey the Beloved at #2 – I also mentioned then-Dem-reps Mike Ross and Dan Boren).

Well, since we’re now up to a 40th scheduled vote, I would say that it’s time to feature 9 more Republicans in the U.S. House, and in no particular order, here they are…

Update 8/12/13: This is yet another reason to vote Farenthold and his pals out of office as far as I’m concerned.

I give you Labrador on immigration (here)…

“Normalize your status”? What does that even mean? And as the story tells us, only about 10 percent of this country actually sides with Labrador.

Of course, Labrador is quick to blame Obama on immigration, as noted here – “A speech is not a bill?” Bills are supposed to come from Congress, not the White House, you moron.

And as noted from here, Labrador says that the Dems want to cover undocumented workers in health care reform, which is patently untrue…

This month, Rep. Raul Labrador (R-Idaho) blamed a standoff over health-care benefits for his decision to drop out of bipartisan talks with seven colleagues who were negotiating a House alternative to the Senate immigration proposal. That has forced House leaders to proceed with a series of smaller-scale proposals next week in lieu of a sweeping agreement.“

When I joined the group, I was told that the aliens would have to pay for their own health care,” Labrador told Fox News. “Now that has changed. And I can’t agree to all of the exceptions.”

Frustrated Democrats argue that Republicans are picking a fight where one does not exist. In both chambers, Democrats say, they have agreed that illegal immigrants would not be eligible for public benefits – including health-care subsidies and Medicaid – as they embark on a path to permanent legal status, which would take at least 10 years under the Senate plan.“

We have said since day one that undocumented people will not have access to subsidies in the Affordable Care Act,” House Minority Leader Nancy Pelosi (D-Calif.) said last month. “Any thought that we want to do something different than that is simply not true. It is a bottom line. No need to even discuss it.”

But of course, according to Labrador, the failure to pass immigration reform is the fault of the Dems – uh huh.

Update 8/26/13: Yeah, how dare those pesky civil rights workers get all “negative” (here)! Gosh, why can’t they sing and dance while facing voter ID obstruction and disenfranchisement?

The Arkansas Times link also tells us that he, like many others in his party, voted against relief for the victims of Hurricane Sandy, and he’s a darling of the Club for Growth, no matter how that affects his congressional district…figures.

Cotton is a bit of a rising GOP star, though – he’s being prompted to challenge conservadem Mark Pryor for Pryor’s U.S. Senate seat (and apparently, based on this, he’s in…yep, no problem with ambition here, having not even finished his first term in the House after winning the seat vacated by Mike Ross).

And like a whole bunch of House Repugs (including Mikey the Beloved), Cotton voted to separate SNAP funding from the farm bill (here). Oh, and Cotton wants to punish not only those who violate economic sanctions against Iran (OK), but their family members too, as noted here (um, and why?).

Update 8/1/13: And I’m sure the Pryor campaign will have fun with this also.

Update 8/9/13: Why do I have a feeling that the fun is just beginning with this guy (here)?

What a prize this guy is, if I do say so…

As far as Huelskamp is concerned, you’re not allowed to discuss gun control (particularly in the aftermath of the Sandy Hook carnage) because you would be advocating a “political agenda” (here).

He also said here that he would file a constitutional amendment to try and restore DOMA, despite the fact that it was overruled by John Roberts and The Supremes (but just remember, it’s “jobs, jobs, jobs” as far as Huelskamp, Cantor and Boehner are concerned). And in keeping with that, he spread more BS here about how kids supposedly do better in dysfunctional hetero families than functional same-sex ones (to the point where even Fluffyhead called him on it).

Basically, Huelskamp is such a Teahadist not job unwilling to compromise that he’s been removed by fellow Republicans from committee assignments (voted against the Violence Against Women Act, also voted against Sandy relief – of course…here).

But how do his constituents feel, I wonder…

“We hear criticisms that [Huelskamp] won’t get along, but that’s not what we elected him for. We elected him to vote for principle,” said Paula Carr, a 64-year-old who sells and repairs lawn and garden equipment. “Compromise is why we’re in the condition we’re in now — too much compromise over the last 30 years.’’

With all due respect to Ms. Carr, the main reason for the “too much comprise” over the last 30 years is because you’ve had the proverbial rug pulled out from under you by Republican politicians selling you “values voter” snake oil while income inequality has gotten worse and worse and worse. And at the risk of sounding like a snotty liberal, I should point out that it was up to you to overcome what I’m sure is your longstanding dislike of people with my political opinion and study the issues that truly matter with an open mind. And apparently, you failed to do so, to the point where you have sent a numbskull like Huelskamp to Washington, where he can do damage not just to your district but the whole country (and that quote means that you’re just as oblivious to that now as before).

Oh, and don’t count on Huelskamp to help with immigration reform either, since he thinks that appealing to Hispanics is “very discouraging” (here).

Update 1/29/14: Yep, Huelskamp is just another “one trick pony” – when all else fails, just attack that gol-danged “li-bu-ruul media” (here – and as far as BENGHAZI! is concerned, as I’ve said at least half a dozen times, I don’t recall any outcry at all when our ambassador David Foy was murdered in Pakistan in 2006).

(From the Chattanooga Times Free Press)

I wish it could be said that all nine Repugs in this post are truly facing electoral problems for next year, but except for DesJarlais, I don’t think that’s apparent at the moment (love to be wrong). I guess the “line in the sand” for the Teahadists is when you betray them on “values” issues, as opposed to issues that actually impact their lives such as the sequester, jobs, health care, the environment, etc. (what a joke).

With that in mind, I give you this…

When even the chairman of the state’s Republican Party says that he doesn’t expect DesJarlais to be re-elected next year…well, I guess the “fat lady,” as they say, is getting ready. 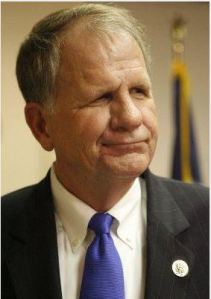 Going further down the rabbit hole as they say, people…

And speaking of Poe, the video from here with him along with Steve King and Louie Gohmert is kind of silly, but fun (and it speaks truth to stoo-pid).

And last but perhaps least…

I think that brings us up to date, and I sincerely hope that I don’t have to revisit this topic (though, knowing this bunch, I have a feeling I will – sigh).

Update 8/29/13: I didn’t know what to do with this item exactly, so I decided to tack it onto the end here; even though the racism on display is positively enraging, I think it demonstrates pretty well the complete and total failure of just about all of our corporate media to educate this country on the urgent issue of how the Affordable Care Act addresses our health care needs.