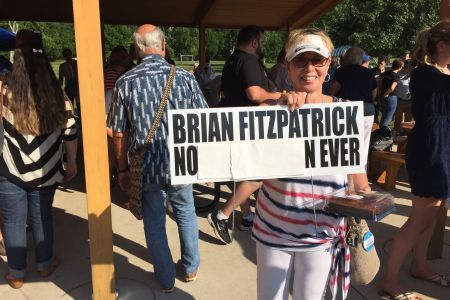 As we know, the mid-term elections are fast approaching, so I thought now was as good a time as any to take a look at what our Wet Noodle 2.0 U.S. House Rep for PA-01 was up to (I’m referring to Brian Fitzpatrick of course).

To begin, it should be noted that Bri-Fi sought to burnish his “pro-life” bona fides by voting for a 20-week abortion ban (that and other votes are noted here – fortunately, as noted here, the ban was rejected by the U.S. Senate in January).

As noted here, though…

Nearly 99 percent of abortions occur before 21 weeks, but when they are needed later in pregnancy, it’s often in very complex circumstances. For example, severe fetal anomalies and serious risks to the woman’s health — the kind of situations where a woman and her doctor need every medical option available.

20-week bans are also highly unpopular throughout the country. 61% of all voters say abortion should be legal after 20 weeks. Plus, Democrats (78%), Republicans (62%), and Independents (71%) say this is the wrong issue for lawmakers to be spending time on.

Fitzpatrick also voted for a permanent ban on federal funds for abortions or health coverage that includes abortions (which is pointless because federal funding for abortions is already banned under the Hyde Amendment, named after a serial philanderer in Congress – more here).

When it comes to civil liberties, Fitzpatrick also voted to reauthorize warrantless spying under the Foreign Intelligence Surveillance Act (FISA); Republicans managed to make it worse in the process according to some fourth amendment advocates (a group which should include everyone I realize).

“Not only does the (reauthorized) bill say you have our blessing to collect communications that contain a target’s email address, it also endorses collecting communications that merely contain a reference to the target,” says Elizabeth Goitein, co-director of the Liberty and National Security program at New York University School of Law’s Brennan Center for Justice. “So literally if you and I sent an email to each other that had the word ISIS in it, if you and I send an email that talks about ISIS, under this bill the government is authorized to collect it.” (Assuming ISIS is a group that the NSA is specifically targeting.)

The bill does impose a warrant requirement upon the FBI, but the way it’s written appears to weaken privacy protections rather than strengthen them, says Goitein. Under the legislation, FBI agents need a warrant to search the Section 702 database when a criminal investigation has already been opened, but not when national security is involved. That means the FBI can query the database on nothing more than a tip. “It incentivizes doing searches earlier and earlier, when it’s less and less justified,” says Goitein.

Fitzpatrick also voted along with Generalissimo Trump (which he has done about 83 percent of the time according to Nate Silver) in the matter of disciplining VA whistleblowers (here).

The number of VA workers fired is up under President Trump. But congressional Democrats and the VA’s union cite VA data showing that the vast majority of those fired in the first five months of 2018 were low-level food service, laundry and custodial staff the majority of whom are veterans. In that same period, only 15 out of 1,096 employees fired were supervisors.

This report comes as the VA’s own inspector general has publicly clashed recently with the VA leadership over access to documents and information about whistleblower adjudication.

A recent NPR investigation showed a pattern of often vicious whistleblower retaliation at the VA in central Alabama and sidelining of whistleblowers in Indiana.

There’s also a news report this week that the VA, under Acting Secretary Peter O’Rourke, is aggressively reassigning or forcing out VA staff members thought to be disloyal to President Trump and his agenda for the agency.

I realize that we’ve had VA issues with both Democratic and Republican presidents (probably the result of too many damn wars and too many of our heroes getting maimed in our country’s service and putting a strain on available resources), but I don’t know of anyone being forced out for being “disloyal” to President Obama.

And speaking of Number 44, Fitzpatrick repeatedly attacked Obama-era rules, including a rule blocking states from defunding Planned Parenthood (here) as well as another rule requiring employers to keep better record of workplace injuries (here). He also voted to overturn a rule prohibiting labor law violators from eligibility for federal contracts, allowing these companies to underpay their workers once more and evade safety regulations (here).

As things have long stood, states only had the authority to institute drug tests for the Temporary Assistance for Needy Families cash welfare program. Thus far, 13 states have instituted such regimes. But what their experience has proven year after year is that the tests, while costly to administer, turn up very few positive test results. Out of about 250,000 applicants and recipients among these states in 2016, just 369 tested positive; in four states, exactly zero people tested positive for illegal drug use. In the states with positive results, they ranged from a low of 0.07 percent of all applicants to a high of 2.14 percent, rates far below the nearly 10 percent drug use rate among the general population.

Meanwhile, states collectively spent $1.6 million on drug testing, on top of the nearly $2 million spent during the previous two years, despite the apparent ineffectiveness of these programs. That’s money that could instead be used to expand welfare benefits or even drug treatment programs.

Another vote from Fitzpatrick to overturn Internet privacy rules allowed internet service providers, or ISPs, to sell “financial and medical information. Social Security numbers, web browsing history, mobile app usage (and) even the content of your emails and online chats,” according to Sam Gustin of the web site Motherboard (vote is here).

Fitzpatrick also voted to end federal checks preventing more than 167,000 veterans deemed “mentally incompetent” from keeping or purchasing firearms (H.R. 1181). This is part and parcel of Bri-Fi’s utterly craven voting recording in near-total fealty to the NRA. As noted here:

Fitzpatrick also voted to prohibit Department of Justice (DOJ) settlements requiring parties to donate monies to outside groups. This may seem a bit obscure, but as a result, the following should be noted from here…

The decision (to distribute settlement funds only to those directly harmed by wrongdoing) by the Justice Department throws into question an upcoming $12 million settlement against Harley-Davidson. As part of the settlement, the motorcycle manufacturer agreed to stop selling illegal after-market devices that increase the air pollution emitted by the motorcycles.

Harley-Davidson had agreed to donate $3 million to a project to reduce air pollution, the Justice Department said in August. With Sessions’s decision Monday, that settlement’s fate is now up in the air.

Also, Fitzpatrick voted to get rid of financial protection regulations, otherwise known as the Dodd-Frank Act, put in place to increase financial stability and consumer protections in the wake of the 2008 recession. As Gregg Gelzinis of the Center for American Progress notes here…

The CHOICE Act also allows banks of any size to opt out of a suite of crucial regulations—such as stress testing, living wills, risk-based capital requirements, liquidity requirements and more—if they maintain a leverage ratio of 10 percent. And it repeals the Volcker Rule’s ban on risky proprietary trading bets. A 10 percent leverage ratio is not nearly enough capital to justify such drastic deregulation.

Furthermore, the CHOICE Act shreds the authority and resources of the Financial Stability Oversight Council, the council of financial regulators tasked with looking at risks across the financial system. FSOC would no longer have the power to address dangers that emerge outside of the traditional banking sector, putting taxpayers at risk. The bill also eliminates the Office of Financial Research, which provides data-driven research support to FSOC to help identify emerging risks.

And speaking of money matters, Fitzpatrick also voted for his party’s so-called tax reform bill last December, which adds about $1 trillion to the deficit (which, of course, Republicans only care about when they’re trying to utterly gut the social safety net). The non-partisan Tax Policy Center found that after the tax plan has taken full effect in 2027, 80 percent of the benefits would go to the top 1 percent of earners in this country. When it comes to tax cuts, the top 1 percent will get an average cut of $1,022,120, while the middle 20 percent will get an average cut of $420, eviscerating any notion that the middle class are the key beneficiaries of the Republicans’ “Unified Framework for Fixing Our Broken Tax Code.”

Absolutely not, according to our analysis. In fact, they should highlight their opposition to Trump’s tax bill even in these red states.

Most polling about the bill has been national, and it suggests broad unpopularity. Our analysis of exclusive national data to model state support for the tax bill suggests that Democrats have little to fear from the GOP law and should embrace progressive policies to mobilize opposition.

Update 10/5/18: For the record, here is Fitzpatrick’s vote from December, and here is a recent vote to make the tax cuts for the rich permanent – heckuva job!

And for anyone out there who may have bought into the “trickle down” lie still after all this time, I give you the following (here)…

In the first six months after the Trump tax cuts were passed, corporate investment in equipment declined, America’s projected long-term deficit swelled by nearly $2 trillion, and wages for the vast majority of American workers fell on an inflation-adjusted basis.

And there is no sign that reality will start comporting with the GOP’s predictions any time soon. As the Washington Post’s Heather Long notes, Morgan Stanley reported last month that America’s businesses are planning less future capital spending now than they were a few months ago. And that finding is bolstered by a recent survey of 393 businesses from the U.S. Chamber of Commerce and the audit firm RSM, which found that only 38 percent of those firms plan to increase investment over the next three years.

Instead of channeling their profits into productive investment, S&P 500 companies are on pace to plow a record-setting $800 billion into buying back their own stocks. The point of such “stock buybacks” is to increase a firm’s share price (and thus, in many cases, the performance-based pay of its CEO) by reducing the supply of shares on the market.

Oh, and for good measure, it should be noted that, according to Nate Silver, Fitzpatrick voted no to impeachment resolutions against Trump at least twice (I realize this isn’t shocking given that they’re in the same party, but it should be pointed out for the record).

By himself, as far as I’m concerned, Brian Fitzpatrick hasn’t done nearly enough to merit another two years in the U.S. Congress. Worse, he’s part of a majority that has done nothing whatsoever to rein in a calamitously unqualified individual currently taking up space in An Oval Office.

Given that, I see absolutely no alternative than to vote for Scott Wallace for Congress from PA-01 on November 6th.

This entry was posted on Monday, September 10th, 2018 at 8:00 pm and is filed under "Culture Wars", Barack Obama, Bucks County Politics, Congress, Donald Trump, Financial, Guns, Health Care, Labor, Military, Politics (General), Science, Surveillance, Technology. You can follow any responses to this entry through the RSS 2.0 feed. You can leave a response, or trackback from your own site.