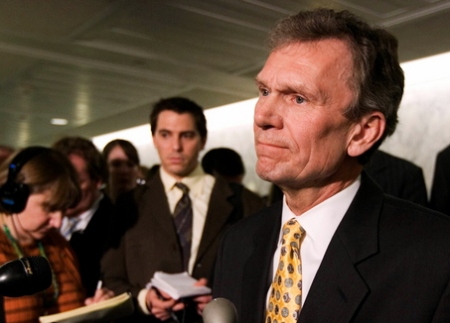 Deborah Solomon of the New York Times conducted the following interview with the one-time Obama HHS Secretary nominee in the Sunday magazine, in which we learned the following…

DS: It has been reported that you’re a paid adviser to the insurance giant UnitedHealth Group, which opposes your belief that health care reform needs to have a public option. Why do you work with them?

TD: On the left there are those who say that you should never talk to people who differ with you on a high-profile issue. My question to the left would be, whom would they advise these insurance companies talk to? Rush Limbaugh and Glenn Beck and Sarah Palin? That’s the alternative. They can talk to Glenn Beck and Sarah Palin, or they can talk to me.

Well, given that UnitedHealth Group has pretty much decided to do anything they possibly can to defeat the public option by claiming it will cost too much money (here), when in reality it will do the opposite (here, according to Daschle himself)…yeah, I think they should be talking to Limbaugh, Beck and Palin instead (to undermine their basically untenable positions, that is).

And this kind of “hedging his bets” mentality is what bugs me about most Dem “centrists” such as Daschle generally and on this issue in particular (though I guess the instruction “from the top down” was for no “drama” on this issue, and that seems to be the way both Daschle and Kathleen Sebelius – the eventual HHS Secretary – have gone about it).

The problem, of course, is that there was bound to be “drama” on this issue, a fight that has been simmering at varying degrees in this country for over 70 years. And I’d like to see Daschle drawing the same confrontational line that he takes against “the left” against some of his other “shareholders” on this issue (every time I see Democrats/progressives/liberals/whatever referred to as “the left,” by the way, I feel that we should all be harvesting grain in a field somewhere wearing red bandanas to capture the sweat of our brow and happily singing songs about the workers’ control of the means of production).

Meanwhile, Alison Kilkenny of HuffPo tells us the following from here…

…it was Daschle who first introduced the idea of nonprofit insurance cooperatives as an alternative to the public option. Daschle and his good buddy, Blue Dog Kent Conrad, came up with the idea of insurance co-ops which included the concept of “triggers” that landed Rahm Emanuel in hot water with progressive groups like Firedoglake when he first floated the idea past the public. Basically, the trigger idea meant that the public option would only become a reality if state co-ops or other programs failed to meet certain cost and coverage goals within five years. The idea sank almost immediately thanks in large part to progressive watchdog groups. Now, Henry Waxman told Roll Call, “[Emanuel] doesn’t stand by the trigger…He said the president and his administration and he are for a public plan as one of the options.”

Privately, Daschle tells his health care industry buddies that the public option is far from finalized. In order to calm the nerves of drug company executives, Daschle told them that “there is no consensus on whether there ought to be a public option.” As recent as last week, he told the hospital executives, “There is virtually no support among Republican members for a public option, and that remains an unresolved element of this debate.” Of course, Daschle is only concerned with support in Congress. Meanwhile, the newest polls indicated that Americans overwhelming(ly) support the idea of including a public option in health care reform.

Given that, Daschle should remain as adamant about the public option (and its cost benefit) as he first was in the linked post above.

I understand, though, that Daschle is a strategist, as Jed L. recounts in this Daily Kos post over what would eventually become the fiasco of Medicare Part D. However, I think health care reform calls for the “fire in the belly” approach of the late Sen. Kennedy (probably impossible to calculate the impact of his loss on this issue and so many others), as opposed to the calculated strategy of Daschle who, as Jed notes, wanted to pass the bill to help fellow South Dakota senator Tim Johnson in a campaign against John Thune in 2002, who of course would defeat Daschle two years later.

(And by the way – and this goes for all Dems – I more or less came to accept that “single payer” wasn’t going to fly, but I never received an explanation to that effect from the party that has tried to pull off health care reform. That would have been a nice courtesy, if nothing else).

I suppose part of what has spurred me on to say something is a recent episode of “Real Time with Bill Maher” where he criticized the Dems for not selling this issue as forcefully as the Repugs would for one of their pet causes. And though I realize that there’s a big difference between marketing something as complicated as health care reform as opposed to a war of choice in Iraq, I’m not sure that Daschle or the Dems generally have any idea of how to do the former (again, in a way befitting the Bush crowd, which was never shy about what it wanted).

In closing, I should note that Solomon tells us that Daschle “felt liberated” when he left the Senate to the point where he decided to wear red glasses.

Given that Tom Daschle has decided to bring the metaphorical knife to the health care gun fight on the matter of the public option (and doesn’t seem to understand those who came properly armed), I believe those glasses have somewhat of a rose-colored tint to them also.

Update: In a related vein, as they say, I present this (hat tip to Atrios – I should link to John Cole more often).