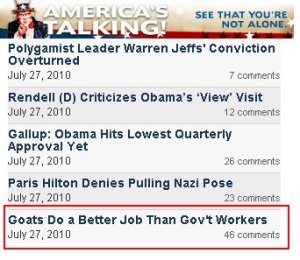 (Note: The post title does not pertain to that great blog in which Digby appears in any way…also, posting is questionable overall from now through the end of the year.)

Yes, I know Baucus is thoroughly compromised by virtue of his ridiculous campaign finance donations from Big Insurance and the fact that legislation without the public option passed out of his committee, but you know what? Good for him for calling out the Repug BS here, including Roger Wicker (and the RNC)’s ever-more ridiculous talking point about “European style” insurance (which, when comparing how well it covers the majority of the people of its countries, actually looks pretty good by comparison).

(And of course, Baucus, despite this moment of clarity, is still far too polite to call out Grassley for the stunts noted here.)

Also, as big of a fiasco as this was, just watch and see what happens when legislation on the climate crisis starts picking up steam – ugh.

Update: I realized later that I made an exception to the “0” thing with the al Qaeda reference, but that’s the only one.

Responding To “The Fearful Five” (updates)

(Fearful of what their handlers in the insurance racket would do to them if they voted against their interests, that is…)

As noted here, Max Baucus, Kent (“A Public Plan Would Bankrupt Hospitals”) Conrad, Blanche Lincoln (from top to bottom above), Bill Nelson and Tom Carper (from top to bottom below) did what we all expected them to do today, and that is to utterly cave on public option amendments introduced to the atrocious Baucus health care travesty of a bill (though Carper and Nelson voted in favor of the Schumer amendment, while all five voted against the Jay Rockefeller amendment).

This is totally in character (or lack thereof) given the following past behavior:

If you’re as steamed about this as I am (though, sadly, not entirely surprised), then I would suggest clicking here and forking some bucks over to a worthy cause in response (though I honestly have to wonder why anyone thought Olympia “Lucy Holding The Football” Snowe would have actually done the right thing here).

Attribution for the pics is as follows:

Update 1 9/30/09: Good point here – needs to be repeated over and over to try and drown out the right-wing blatherings on this issue…

A “Remedy” For An Obama AP Health Care Harangue?

I read a good portion of this “analysis” of the efforts of the Obama Administration to address the pivotal crises it inherited from Bushco, and I found myself wondering how long it took writer Tom Raum to recycle what he’d discovered in other reports, link to some other sympathetic quotes or sources, press ENTER, and then subsequently retire to a watering hole of his choosing.

(And to think, these jokers are creating a registry to track unauthorized use of their laughable content, as noted here.)

Yes, I will grant you that there is anxiety out there concerning how our president (who has been in office for all of six months and three days, let’s not forget) is managing the economy and the Dems’ attempts at health care reform (to say nothing of two other wars and coordinating with Congress on cap-and-trade legislation, among other matters), but I will attempt to provide the detail in this post concerning those issues that Raum, for whatever reason, did not.

To begin, this recent Gallup Poll tells us that about three quarters of those Dems polled approve of Obama’s handling of health care policy, though he is down 50-44 with independent voters (and do you really need to ask what Repug voters think?). Basically, the Dem and Repug numbers are a wash, and the independent numbers are representative of everyone as a whole.

And Bob Cesca tells us the following from here…

In a July 14 Gallup Poll, 86 percent of Americans think it’s “extremely important” for healthcare reform to include allowing them to get insurance regardless of employment or medical status. 58 percent support taxing the rich to pay for healthcare. And we all know about the super-majority support for the public option.

So one thing’s for sure, we don’t want what the Republicans are offering. And we broadly support significant changes in the healthcare system. The fact that the president is upside-down only indicates that, while on the right track, he isn’t pushing this with the ferocity it demands.

Well, I would say that that changed this week with his press conference (no other reason to give an idiot like Jim DeMint the time of day), setting the stage for what is described here in August as a “month even more heated and critical in the reform process” (and another media appearance followed, as noted here in the New York Times, from Reuters).

I believe, though, that the issue that is really preventing Obama and the congressional Dems from taking charge on this is the cost (yes, a “master of the obvious” realization, I know). And in an effort to get as much of an understanding of the numbers as I could (truly a daunting task), I navigated here to the OMB site listing the projected fiscal year numbers, and discovered the following:

The United States spends over $2.2 trillion on health care each year—almost $8,000 per person. That number represents approximately 16 percent of the total economy and is growing rapidly. If we do not act soon, by 2017, almost 20 percent of the economy—more than $4 trillion—will be spent on health care.

To help physicians get the information they need to provide the highest quality care for patients, the Recovery Act of 2009 devotes $1.1 billion to comparative effectiveness research—the reviews of evidence on competing medical interventions and new head-to-head trials. The information from this research will improve the performance of the U.S. health care system.

The President has devoted in the Recovery Act an unprecedented $1 billion for prevention and wellness interventions. This will dramatically expand community-based interventions proven to reduce chronic diseases.

… the Budget sets aside a reserve fund of more than $630 billion over 10 years that will be dedicated towards financing reforms to our health care system.

The reserve fund is financed by a combination of rebalancing the tax code so that the wealthiest pay more as well as specific health care savings in three areas: promoting efficiency and accountability, aligning incentives towards quality and better care, and encouraging shared responsibility. Taken together, the health care savings would total $316 billion over 10 years while improving the quality and efficiency of health care, without negatively affecting the care Americans receive.

This is good stuff (and let’s not take for granted the fact that this administration has really made the effort to crunch out the numbers on its proposals perhaps more thoroughly than any other in my memory with the exception of the Clintonites…I don’t have an exact number on how many are now working for Obama, but I’m sure it’s more than a few).

However, I have two observations:

1) I sincerely hope the President has a backup plan for financing the reserve fund if the one he proposes here goes up in smoke. As far as I’m concerned, there should be a sliding scale of individual payment rates based on earned income for all workers in this country, not just “the rich” (they should pay more, but to me, that doesn’t mean that anyone under, say, $250G a year, should get off with nothing).

And please understand that the last thing I want to do here is pay more in taxes, but I think we need to be realistic. I’d propose a three-year tax which would be the equivalent of a nice, healthy round of “V.C.” funding for a startup enterprise, and then the reserve fund should be forced to manage itself based on what would likely be employer payments when companies realize it costs less to pay into the public plan – a public plan is most definitely assumed here, people – than to negotiate health insurance with private carriers on its own.

(Also, the one person here who has been virtually silent in all of this is Max Baucus, the chair of the Senate Finance Committee. I’m quite sure that he is leading the effort to crunch out some of the numbers I’m noting here, and with any luck, he’ll present them first to his own party before the Repugs, as noted here.)

2) I navigated to the administration’s healthreform.gov site, and I should point out that there is a pretty cool interactive map of this country by state telling you about current and projected health care costs for those working and unemployed, and it’s sourced pretty thoroughly also. However (and I know this is tough), what I think this site should contain are links with some “ballpark” estimates of, again, how much all of this will cost (for employed and unemployed workers, for families, small and large business owners, etc., as well as the cost of doing nothing). And those numbers should be presented graphically in chart form (preferably pie charts or bar graphs – that seems to be the easiest format to digest).

I think the Obama Administration is relying too much here on the president’s oratorical skills and his commendable efforts to communicate the misery suffered by those who lost their health insurance through their employers. That is certainly a big part of the story, but the “numbers” piece that I believe is largely missing (despite the command of this information by President Obama, as Paul Krugman noted here today) is what’s causing some of the approval numbers to skew downward.

And as a result, this gives the Party of No more reason to scream in protest, thus obscuring once more the impact the health care crisis is having on our economy (here and here).

And speaking of the economy, the AP’s Raum tells us the following in his column…

Job losses have now wiped out all the job gains since the last recession in 2001, the first time that has happened since the 1930s.

Pretty funny that Raum points that out actually, given the fact that, if you search on “Bush” in his article, you find out that the word doesn’t exist (as all good Repugs know, the economy is all Obama’s fault).

(Oh yes, I’ll be sooo hurt if the AP tells me that I’m not authorized to use their content; not linking to them will do wonders for the cause of informed dialogue.)

Update 1: Hat tip to profmarcus at TakeItPersonally for this (it makes me gag that some of these people profess to believe the same things I do).

Update 2: Potty mouth Jane H. articulates how I feel about the “Bush Dogs” perfectly on all issues (particularly, though, on health care) at the end here (h/t Atrios).