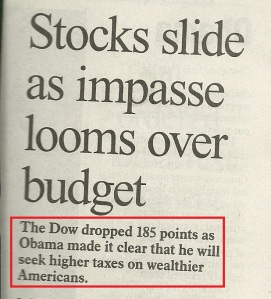 Leave it to Uncle Rupert’s conservative house organ to use the occasion of Robert McNamara’s death to sputter itself into a rage at “(McNamara’s) former liberal allies for refusing to turn against the Vietnam War as early as they did,” even though, in this editorial, the Journal admits that “only later as the war dragged on did these liberals lose their nerve, and they never forgave McNamara for fighting on — even years later after he finally agreed they were right.”

Yes, you can argue that the Vietnam War split the “left” in this country, with those such as Senator Henry Jackson supporting it, and others, most notably George McGovern, opposing it (along with the “new left” borne of the Civil Rights movement; Dr. Martin Luther King most definitely opposed the war). Also, President John F Kennedy (for whom McNamara served as Defense Secretary, and Lyndon Johnson later), when interviewed in September 1963, opposed sending more troops (I cannot access the YouTube video at the moment).

The fact of the matter, though, as noted here, is that our involvement in Vietnam really began in 1950, when President Harry Truman authorized $15 million in military aid for the French whose outposts in North Vietnam were attacked that year; his successor, President Dwight Eisenhower, greatly increased military aid during his presidency, including training for the new South Vietnamese Army.

As I said, I will acknowledge that some liberals supported the war until about 1965, but to imply that conservatives did not is patently absurd.

And of course, since we’re talking about the Journal, you can rest assured that they won’t miss this opportunity to fluff Commander Codpiece and his determination to “stay the course” in Iraq as a contrast, crediting him solely for whatever successes have transpired in that country, failing to acknowledge of course that the surge, by itself, would have been fruitless without the benefit of the Sunni Awakening councils and the ethnic cleansing that has been totally ignored by our corporate media.

Also, concerning the composition of President Kennedy’s military advisors (including McNamara), I think Errol Morris (whose film “The Fog of War” prominently featured McNamara) had some interesting insights here (and believe me, there were no liberals in this bunch)…

Mr. McNamara became defense secretary in 1961. The Joint Chiefs were hawks. This is clear in reading the transcripts of the Cuban missile crisis; the generals speak to John F. Kennedy with derision, contempt and anger. When Mr. McNamara took office he discovered secret Pentagon plans for a pre-emptive nuclear strike against the Soviet Union.

He worried that the Joint Chiefs wanted nuclear war, and he was determined not to allow that to happen. From ’63 to about ’67, we had first-strike capacity and nuclear superiority against the Soviet Union. (In the words of George C. Scott in “Dr. Strangelove,” I’m not saying we wouldn’t have got our “hair mussed.” But we would have destroyed them.) After Kennedy’s death, he served that central role of keeping the Joint Chiefs in check. If true, he becomes not the villain of American history, but something quite different.

And what about the escalation of the Vietnam War? Recently, the taped conversations between President Lyndon Johnson and his advisers have been made public. Listening to the president and Mr. McNamara, it appears that the pressure for escalation did not come from Mr. McNamara, but from Johnson. Mr. McNamara was not an enthusiast for this war. But charged with the responsibility for carrying it out, he argued for it.

And after Johnson’s term ended and Richard Nixon’s began, we saw “Tricky Dick” and Henry Kissinger, then his assistant for National Security Affairs, concoct their scheme to secretly bomb Cambodia; Nixon told the country during the 1968 election that he planned to bring “peace with honor” to Vietnam, though in fact this tactic ended up extending the war for seven more years, and it also led to the rise of the Khmer Rouge in that country – the genocidal slaughter was documented in “The Killing Fields.”

So basically, you cannot assign blame or praise for our experience in Vietnam and Southeast Asia to any one political party or ideology; there is blame enough to go around.

Often I find myself laughing at the bald-faced partisanship of the Journal’s editorials. On this occasion, however, I find myself cringing in abject disgust over their twisted interpretation of not just one war in Vietnam, but the second one in Iraq, from which we are still trying to extricate ourselves due to the willful, stupid intransigence of another president from Texas.

From 9/9 also…words to live by from here (though, being a columnist, Herbert has been known to drift over to “the dark side” on occasion – h/t Atrios)…

Ignorance must really be bliss. How else, over so many years, could the G.O.P. get away with ridiculing all things liberal?

Troglodytes on the right are no respecters of reality. They say the most absurd things and hardly anyone calls them on it. Evolution? Don’t you believe it. Global warming? A figment of the liberal imagination.

Liberals have been so cowed by the pummeling they’ve taken from the right that they’ve tried to shed their own identity, calling themselves everything but liberal and hoping to pass conservative muster by presenting themselves as hyper-religious and lifelong lovers of rifles, handguns, whatever.

So there was Hillary Clinton, of all people, sponsoring legislation to ban flag-burning; and Barack Obama, who once opposed the death penalty, morphing into someone who not only supports it, but supports it in cases that don’t even involve a homicide.

Anyway, the Republicans were back at it last week at their convention. Mitt Romney wasn’t content to insist that he personally knows that “liberals don’t have a clue.” He complained loudly that the federal government right now is too liberal.

“We need change, all right,” he said. “Change from a liberal Washington to a conservative Washington.”

Why liberals don’t stand up to this garbage, I don’t know. Without the extraordinary contribution of liberals — from the mightiest presidents to the most unheralded protesters and organizers — the United States would be a much, much worse place than it is today.

There would be absolutely no chance that a Barack Obama or Hillary Clinton or Sarah Palin could make a credible run for the highest offices in the land. Conservatives would never have allowed it.

Civil rights? Women’s rights? Liberals went to the mat for them time and again against ugly, vicious and sometimes murderous opposition. They should be forever proud.

The liberals who didn’t have a clue gave us Social Security and unemployment insurance, both of which were contained in the original Social Security Act. Most conservatives despised the very idea of this assistance to struggling Americans. Republicans hated Social Security, but most were afraid to give full throat to their opposition in public at the height of the Depression.

“In the procedural motions that preceded final passage,” wrote historian Jean Edward Smith in his biography, “FDR,” “House Republicans voted almost unanimously against Social Security. But when the final up-or-down vote came on April 19 [1935], fewer than half were prepared to go on record against.”

Liberals who didn’t have a clue gave us Medicare and Medicaid. Quick, how many of you (or your loved ones) are benefiting mightily from these programs, even as we speak. The idea that Republicans are proud of Ronald Reagan, who saw Medicare as “the advance wave of socialism,” while Democrats are ashamed of Lyndon Johnson, whose legislative genius made this wonderful, life-saving concept real, is insane.

When Johnson signed the Medicare bill into law in the presence of Harry Truman in 1965, he said: “No longer will older Americans be denied the healing miracle of modern medicine.”

Reagan, on the other hand, according to Johnson biographer Robert Dallek, “predicted that Medicare would compel Americans to spend their ‘sunset years telling our children and our children’s children what it was like in America when men were free.’ ”

Without the many great and noble deeds of liberals over the past six or seven decades, America would hardly be recognizable to today’s young people. Liberals (including liberal Republicans, who have since been mostly drummed out of the party) ended legalized racial segregation and gender discrimination.

Humiliation imposed by custom and enforced by government had been the order of the day for blacks and women before men and women of good will and liberal persuasion stepped up their long (and not yet ended) campaign to change things. Liberals gave this country Head Start and legal services and the food stamp program. They fought for cleaner air (there was a time when you could barely see Los Angeles) and cleaner water (there were rivers in America that actually caught fire).

Liberals. Your food is safer because of them, and so are your children’s clothing and toys. Your workplace is safer. Your ability (or that of your children or grandchildren) to go to college is manifestly easier.

It would take volumes to adequately cover the enhancements to the quality of American lives and the greatness of American society that have been wrought by people whose politics were unabashedly liberal. It is a track record that deserves to be celebrated, not ridiculed or scorned.

Liberals need to get over it.

Update 9/10/09: By the way, I had to remove the “New Rules” video because HBO decided to be hardasses about it.