The Job “Skinny” On The “Stim” 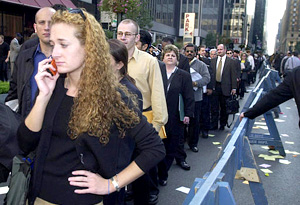 Yesterday’s corporate media spin from Michael Gerson tells us the following (from here, with our dutiful right-wing scribe trying to create a metaphor between the stimulus and the Titanic)….

The jobs report last week opened a long gash beneath the waterline of President Obama’s legislative agenda. Few realize it, but a scramble for lifeboats is about to begin.

On closer inspection, the economic news, which seemed bad, is even worse. Not only did unemployment rise to 9.5 percent but wages fell, undermining the consumption needed to revive a consumption-driven economy. Unemployment increased among “breadwinners” — married men and women who head households — also making major family purchases more difficult. Recent increases in unemployment benefits and food stamps have helped many Americans pay for food and rent. Jobs, however, are what lead to the purchase of furniture, cars and homes. Paired with a decline in business investment, these trends make a second-half recovery less likely.

The stimulus package hasn’t been very stimulating — as many economists predicted. Pouring money into the economy through a thirsty sponge of federal programs — the preferred method of Congress — is slow and inefficient. In retrospect, all of the stimulus funds should have been given to individuals directly from the tap.

You know, it takes a particular kind of gall for a Dubya acolyte like Gerson to blame Obama for a rise in unemployment to 9.5 percent and a fall in wages when you consider the following from here, comparing Number 43 to his predecessor, with unemployment at 7.3 percent when Clinton took over from Bush 41 and ending at 4.2 percent when he left, whereas those figures were 4.2 percent when Dubya took over of course, but 6.5 percent and climbing when he left.

(The linked post above also tells us that real median income increased to almost $6K under Clinton but declined by about $1,200 under President Clueless – and yes, I would like to see better sourcing on those numbers also, but they sound right).

And it also takes a particular kind of gall for Gerson to criticize Obama on jobs overall, given that Gerson’s old boss was responsible for the lowest job growth in this country since World War II (here).

But as far as the number of “stim” jobs is concerned, this CNN story tells us the following…

The figure remains elusive, but Congress provided one of the first peeks this week by reporting that stimulus has funded 21,000 highway and transit jobs as of May 31.

The number, one of the first counts of actual stimulus-based employment, is based on state reports to the House Transportation and Infrastructure Committee. Thousands of indirect jobs — such as the deli employee who prepares lunch for the construction crew or the workers who produce the steel needed for projects — were also created or sustained.

The White House says the figure is in line with its projection that the $787 billion recovery act has created or saved 150,000 jobs in the administration’s first 100 days. The 150,000 number, which includes direct and indirect positions, is an estimate based on the amount of stimulus funds spent. Each $92,000 of stimulus funds spent translates into one job, according to the White House formula.

And yes, I know the 150,000 number is only a projection and we’re a long way off from that, and I’m a little hesitant to believe this number from Obama – 600,000 by the summer – but again, let’s give the man the benefit of the doubt for now (he hasn’t even been in office for six full months yet, OK?).

And here is another consideration as noted in this front page New York Times story today, and that is the fact that the states have doled out a disproportionate amount of job-creating “stim” funds for road work to less populated areas (where it will do less good) than to cities.

Also, this story in Time Magazine from last month tells us of people who obtained “stim” jobs, including Christian Zimmerman (on track to hire 135 workers for his construction company), John Berger (whose company makes homes more energy-efficient, on track to hire about 300), and Francis Jamiel, who was able to restock his shoe store with “stim” money which has led to a doubling of sales (and this story, although it takes a dim view of the “stim,” nonetheless provides information on how to look for “stim” jobs).

Finally, this post from Brent Budowsky over at The Hill reminds us that Gerson is cleverer than most (I’ll give him that much) in criticizing Obama on the economy, compared to more rabid GOP partisans such as Ron Christie, John Feehery and Cheri Jacobus who are a lot more open in wishing for a GOP rebound of sorts against a backdrop of further job losses.

To return to the “sinking ship” metaphor, if this is the only “solution” the Party of No truly has to offer, then they’re “taking on more water” than I thought. 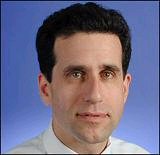 I have to admit that this was a rather curious editorial from the Inquirer today written by Fred Hiatt (pictured) of the Washington Post, in which he sneaks in a dig at the federal government and “how little many Americans expect of (it),” as well as the fact that approximately 600,000 government jobs will need to be filled in the next four years, according to Max Stier of the Partnership for Public Service…

The opportunity lies not only in the huge number of looming vacancies, but also in two factors driving young people to consider government jobs: excitement about President Obama, and the fact that nobody but the government is hiring. The federal government, old (one-quarter of the workforce is younger than 40, compared with half in the private sector) and often lumbering, has a chance to become younger, nimbler, and more talented.

I’ll be honest with you – I don’t like Fred Hiatt for reasons that have nothing to do with staffing levels of our government (though the dig I highlighted certainly doesn’t work in his favor).

I don’t like Fred Hiatt because he’s nothing but a Bush (and Iraq War) apologist (and a pretty damn plain McCain booster, all of which is noted here; hey, if he supported McCain and he were a UPS driver, plumber, or anything else not involving media manipulation, that would have been fine – the problem is that he’s the editorial page editor of The Washington Post, and he advanced his opinions for himself pretty clearly).

In his column quoting what Stier has to say (Hiatt probably should have just let Stier do the honors instead), both individuals leave it up to Obama to re-energize government, which is a worthy goal (just add it to the multitude of other messes left to our current president by Number 43).

However, the following should be pointed out from here…

(Hiatt’s column) has some serious problems, among them, skipping over the fact that the Obama administration has begun to shape its response to the federal workforce crisis. Hiatt only quotes Max Stier (a frequent source of mine), who condemns the administration’s actions to this point. Hiatt doesn’t appear to have spoken to anyone in the Obama administration, and he does not mention Michelle Obama’s visit to the Office of Personnel Management, the president’s challenge to federal employees to come up with ways to improve government, or the fact that Obama’s OPM Director John Berry, is in place, along with almost his entire leadership team, much earlier than his predecessors.

It should also be noted that, when it comes to funding government agencies, the Obama Administration is operating under a resolution that holds funding for most departments to ’08 levels, as noted here, which definitely impacts hiring.

That didn’t reduce government expenditures under Dubya, however – far from it; this 2004 post, showing that federal spending increased at its fastest rate in 30 years, projected that Dubya wouldn’t veto legislation, though he did that frequently after the Dems took over Congress in 2006.

So what have the agencies done in response to utilize their experienced workforce as effectively as possible? As noted from here…

Officials from (HUD, SSA and USAID)…told us that they have difficulty attracting qualified staff with specialized skills. To address these challenges, the three agencies rely on older workers in different ways. USAID brings back its knowledgeable and skilled retirees as contractors to fill short-term job assignments and to help train and develop the agency’s growing number of newly hired staff. SSA uses complex statistical models to project potential retirements in mission critical occupations and uses these data to develop recruitment efforts targeted at a broad pool of candidates, including older workers. While all three agencies rely on older workers to pass down knowledge and skills to junior staff, HUD officials told us this is the primary way they involve older workers, due in part to the agency’s focus on recruiting entry-level staff.

…the federal government has historically enjoyed relatively high retention rates, with 40 percent or more of federal employees remaining in the workforce for at least 5 years after becoming eligible (for retirement).

As noted above, it would have been nice if Hiatt had bothered to talk to someone from the Obama Administration before he wrote this. He is right, though, to point out that the government always benefits from an influx of new talent, as much as that talent can be absorbed given existing staffing and budgetary constraints. However, given this story (somehow, though, I don’t think the scenario has changed since it was written, expect maybe to get worse), I think Hiatt ought to pay more attention to the “graying” of his own business first (and just try referring to your colleagues as “often lumbering,” Fred – I dare you).