The Rehabilitation of Jim Cawley? 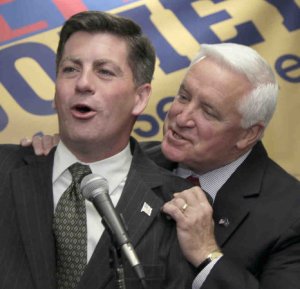 (Note: For a lot of reasons, my typical posting activity is going to be greatly constrained, but I hope to be able to post periodically on selected topics. We’ll see.)

PHILADELPHIA, Jan., 13, 2015 /PRNewswire-USNewswire/ — Jim Cawley has been named president and chief executive officer of United Way of Greater Philadelphia and Southern New Jersey (UWGPSNJ), effective February 9. The announcement was made by Lon Greenberg, chairman, UGI Corporation/AmeriGas and chair of UWGPSNJ’s regional Board of Directors, following a six-month national search.

“The Board was determined to identify a leader who demonstrated a commitment to serving the community and carrying out our mission, and who possessed the ability to build relationships, engender trust in the community and generate results. We considered a wide cross section of candidates, and Jim was the clear choice,” says Greenberg. “He has spent the majority of his career in the service of others, both regionally and nationally, developing productive relationships and leading large groups of constituents to success. As lieutenant governor, he also has a unique understanding of how United Way’s Impact areas connect, and how strategic improvements in Education, Income and Health can lift the entire region.”

Philadelphia Mayor Michael A. Nutter endorsed the Board’s selection. “Jim Cawley is a great guy and a fantastic public servant. I truly enjoyed working with him when he was a County Commissioner in Bucks County, in part because he always displayed a regional perspective on issues. He understood that we are one Philadelphia region with one common future,” says Mayor Nutter. “As lieutenant governor, Jim Cawley was always available and always listened when my team and I needed to discuss issues related to legislation or economic development projects. He is a great friend to Philadelphia and the Commonwealth and he cares passionately. I know that he will do a terrific job in his new position at the helm of United Way.”

“A great guy”? “A fantastic public servant”? Did I miss a memo or something?

Gosh, that’s not the Jim Cawley I remember from his days as a Bucks County Commissioner.

Oh, and by the way, I couldn’t find anything in the prnewswire story about Cawley’s compensation for his new non-profit job.

All of this makes me take an even dimmer view of United Way than the one I already have (here) – probably a lot more worthwhile charities to donate to, especially with a toad like Cawley running the local branch of this outfit.

Update 5/25/10: More bang-‘em-up pro-gun antics from McDonnell – somehow, I’m sure he knew what he was doing by allowing the name of the non-existent group here.

(Note: I’m probably a couple of weeks away at least from posting again the way I have in the past due to my arm injury. I’ll be sure to let you know what’s going on.)

Update 1/24/10: The Courier Times points out here today that Anderson basically contributed $4,400 to “Republican causes” and was rewarded with about a $50,000 raise as a result. And Republicans dare to scream about alleged Democratic Party fiscal malfeasance.

For the last five years, it has been my privilege to serve the residents of Bucks County as chief operating officer. During that time, your county government has made tremendous strides – fiscally, physically and in the constantly evolving realm of service provision. At a time when governments around our nation are seeing budgets stretched thin or turned to ribbons of red ink, Bucks County is uniquely positioned to handle the current economic climate. The reason for this is two words: fiscal responsibility.

For three years in a row, the board of commissioners held the line on county property taxes – the first time since 1994-96!

I’m not sure why Sanko is praising the commissioners here, but it should be noted that (according to here), property taxes in Bucks have gone up 46 percent since 2001, so I think the whole “three-year” thing should be taken with a grain of salt, to say the least.

Further, under the expert guidance of Finance Director Brian Hessenthaler, the last five years have produced a steady growth in the county’s general fund, also known as the “rainy day” fund. From a 2005 total of $9 million, we increased that rainy day fund to the current figure of $73 million. This allowed us to earn a record setting high S&P bond rating, and saves us money as we borrow in the future for open space and the new Justice Center.

In response, I’d like to point out (from here) that every time our august Bucks County Commissioners want to designate property for open space, they issue a bond as opposed to drawing up a regional plan in coordination with other Bucks municipalities, which is bound to be cheaper; as former commissioner candidate (and now PA House Rep for District 31) Steve Santarsiero noted, “the county doesn’t have enough money to (issue a bond) for every piece of property that needs (an open space) designation.”

How has this growth been achieved? In addition to prudent spending, we’ve refinanced multiple bond issues, hired a county grants coordinator (producing more than $2 million in grant awards), convened a BEST (Bucks Employees Saving Taxes) Committee that replicates sound business practices, asked our management team to make difficult but wise choices regarding their departmental budgets, and improved efficiencies by hiring an asset manager.

Oh, and speaking of hiring employees, it should be noted that Sanko, along with Bucks County commissioners Jim Cawley and Charley “I Have A Semi-Open Mind” Martin, “(hired) two employees without publicly advertising those open positions or interviewing anyone other than those who got the nod for the jobs,” as the Courier Times tells us here (one position was a $30,992-a-year job as an administrative assistant for the public information office, and the other was a $19-an-hour position for a legal secretary – the whole matter was aptly summed up by the other commissioner, Dem Diane Marseglia, as “policy as usual”).

And speaking of cronyism in hiring, Martin said here that he wanted to replace Sanko with “a political operative” (the beat goes on).

Also, I would like to enter the following “into the record,” as it were, as long as Sanko is telling us how wonderful he is:

I will acknowledge Sanko’s successes in his position, which he notes in his farewell. While he deserves credit, I would be happy if his replacement achieved a similar measure of success without the execrable wreak of political partisanship that Sanko managed to turn into a job requirement.

Cawley’s “Can’t Do” Spirit On The Stimulus

I want to thank Bucks County Courier Times letter writer Paul Lang, Jr. this morning for jogging my memory a bit on a recent quote from one of our illustrious county commissioners (sarcasm intended) – here is his letter…

Regarding county Commissioner Jim Cawley’s quote, “I am far from somebody who is rooting for the (Democratic) economic stimulus package”: This comment is un-American and outrageous. I am an American first and want only the best for this country regardless of political party affiliation.

As a registered Democrat, I voted for Barack Obama. If Cawley’s Republican choice, John McCain, had won the presidency, then I would be cheering and praying for McCain to succeed.

Cawley should never be elected to any office anywhere again. He has shown his true un-American colors.

And of course, that met with the predictable wingnut comment noise online, which Lang should wear as a badge of honor, actually.

I believe the reason why I missed this is because the original quote from Cawley appeared in this column by J.D. Mullane about the current dilapidated state of Washington Crossing Park. And Cawley is entitled to his opinion, I realize, but in his capacity as a commissioner, I think his comments should be neutral at the very least, particularly given the fact that the Repugs are so tolerant of opinions which differ from their own, as we know.

Well, for Cawley’s information, here is a link to an analysis from The Philadelphia Inquirer showing that Bucks County stands to receive millions in school district funding from the stimulus, as well as $600 million from the $48.1 billion in transportation stimulus funds for Greater Philadelphia (affecting many Bucks residents), as well as approximately $318 for highways in southeastern Pennsylvania, $120 million for highways in southern New Jersey, and $193 million for SEPTA (noted here).

And as noted from here, the stimulus provides funding to…

But of course, Cawley is “far from somebody who is rooting for the (Democratic) economic stimulus package.”

This is typical for someone who, as noted here, refused to fund an Army Corps of Engineers study of the Delaware River, to the point where Patrick Murphy had to intervene or else Bucks would have lost out on critical federal funds for this project.

And as noted here, Cawley told a group of people gathered in Bristol, Pa. that “county money pegged for a three-hole golf course and driving range can be spent only for recreational purposes” (just what Bucks needs – another golf course), even though the majority of the residents favor a skate park, but with a chunk of the $400,000 going to keep the struggling Bristol Township homeless shelter open (also favored by Bucks commissioner Diane Marseglia, with the third commissioner, Charley Martin, stating that he believes skateboarding is “a fad” – here’s some reading material on this for Mr. “I Have A Semi-Open Mind”).

Finally, this tells us that the Bucks County Coalition for Voting Integrity was denied access to records on the purchase of new county voting machines, as well as the fact that the Bucks County Health Department refused to turn over records of its pool inspections to the Doylestown Intelligencer, which attempted to publish an investigatory report on the safety of Bucks County swimming pools some years ago.

So of course Cawley has to oppose the stimulus because of what it could provide to families and the working middle class of this county; also consider the fact that Cawley’s playmate Charley Martin would never have been returned to office were it not for the intercession of clueless third party candidate Jay Russell working on behalf of the Repugs, as noted here – it’s clear that their grip on county government is slipping anyway.

And if the stimulus succeeds, making it plainly obvious which political party wants to ensure prosperity in Bucks and the rest of this country and which one doesn’t, they’ll lose that grip once and for all.