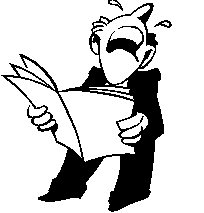 It’s probably thoroughly naïve of me to feel compelled to point out that it’s not just any media organization that has agreed to give a pay check and air time to another Bushco accomplice, but the Columbia Broadcasting System (which was once called “the Tiffany Network”). CBS, which once employed the man who spoke the following words:

If we confuse dissent with disloyalty — if we deny the right of the individual to be wrong, unpopular, eccentric or unorthodox…then hundreds of millions…who are shopping about for a new allegiance will conclude that we are concerned to defend a myth and our present privileged status. Every act that denies or limits the freedom of the individual in this country costs us the … confidence of men and women who aspire to that freedom and independence of which we speak and for which our ancestors fought.

No one can terrorize a whole nation, unless we are all his accomplices.

We cannot make good news out of bad practice.

We hardly need to be reminded that we are living in an age of confusion — a lot of us have traded in our beliefs for bitterness and cynicism or for a heavy package of despair, or even a quivering portion of hysteria. Opinions can be picked up cheap in the market place while such commodities as courage and fortitude and faith are in alarmingly short supply.

Our history will be what we make it. And if there are any historians about fifty or a hundred years from now, and there should be preserved the kinescopes for one week of all three networks, they will there find recorded in black and white, or color, evidence of decadence, escapism and insulation from the realities of the world in which we live. 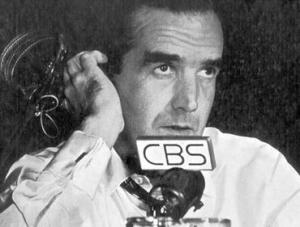 Even though I’m curious to find out what he would have said, I’m still glad that Edward R. Murrow didn’t live to see any of this.

A “Condi Comeback” With The “Queen Of Soul”?

This tells us that Aretha Franklin will be performing at the Mann Center for Performing Arts in these parts next Tuesday July 27th, with musical accompaniment provided by former Bushco Secretary of State Condoleezza Rice (as the story tells us, Rice is an accomplished classical pianist).

With that in mind, I wondered if Dr. Rice would care to take a shot at a certain timeless hit from the show’s headliner (here). And if she did, I have a feeling that it would go something like this…

Bolton says I’m no hard liner, playin’ games for a fight
He should chill, that PNAC fool – the world’s wrong, and I know I’m right

Let’s “nation build,” give one more try
One more 9/11, and then let those warheads fly

You had better stop and think before you think, think!!

I hope Former Madame Secretary sticks to her career in music and holding down cushy jobs at conservative-friendly think tanks, as opposed to entering public life once more (and I’ll “stick to my day job” also:-).

Dubya Tells All – But Does Anybody Care? 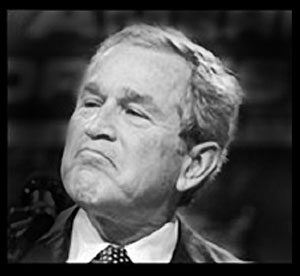 In less than three months, President-elect Barack Obama will take office and the Bush administration will belong to history. With President George W. Bush reportedly interested in writing about his White House years, publishers have a suggestion:

“If I were advising President Bush, given how the public feels about him right now, I think patience would probably be something that I would encourage,” says Paul Bogaards, executive director of publicity for Alfred A. Knopf, which in 2004 released Bill Clinton’s million-selling “My Life.”

“Certainly the longer he waits, the better,” says Marji Ross, president and publisher of the conservative Regnery Publishing, which is more likely to take on anti-Obama books in the next few years than any praises of Bush.

Yep, it looks like Commander Codpiece has another issue on his hands, all right. Maybe he could contact Vantage Press or another Vanity publisher and try his luck with them.

In case that doesn’t pan out, then I believe Dubya will need a truly creative solution here, and I’d like to suggest tailoring his memoir to another type of trade publisher.

And while trying to sell his term in the White House as, say, a Harlequin Romance novel would pose peculiar challenges, maybe something like this could work…

He strode purposefully across the plush carpet of the West Wing as his aides scurried to keep up with him, shuffling papers and keying their Blackberries to determine which brief the President should examine first or which advisor he should consult to mitigate yet another looming global crisis.

And as George W. Bush approached the Oval Office, his steely glare beholding all before him, arms rested at his side and his chest forward, firmly presenting an air of confidence with a hint of defiance, his eyes met Laura’s, and the tiniest hint of passion stirred once more within her, continually amazed at how the carefree, jovial frat boy she once knew had ascended to become the most important head of state on earth.

Hey, did I say that it couldn’t be fiction?

Or how about this?

At once, he entered the chamber of his command, and as he quickly turned to survey the landscape, he noticed her, obediently seated by his desk, gazing raptly upon him, seemingly beholden to his every whim.

Even her name conjured desires within him of the teasing thrill of the chase, the forbidden conquest, and the unspoken joy of her acquiescence, giving herself utterly to the leader of the free world under the spell of the aphrodisiac of presidential power. And her subtle pout as she awaited him wavered only slightly as her eyes shifted slightly away from his, glancing towards the sleek cut of his slacks, which stylishly tried to understate what she perceived to be the continual readiness of his manhood.

So, as you can see, our preznit currently faces an obstacle to his place in literary history that shouldn’t be insurmountable, I believe.

And if all else fails, someone can put together a children’s pop-up book for him, showing Iraq’s non-existent WMD, the Constitution with the First, Fourth and Tenth amendments crossed out, and flies buzzing around dead Katrina victims in the Ninth Ward of New Orleans.