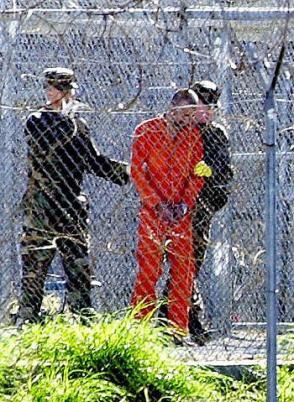 Q Binyam Mohammed, a Guantanamo detainee, arrived in Britain today. This would constitute the first Guantanamo detainee released freely into society. How does the administration respond to criticisms from some of the military families he met with just a couple of weeks ago that this is premature, it’s before the 180-day review is complete, and does not fulfill his promise to them and to the country at large that he would weigh all security implications before making a decision on a detainee for release?

MR. GIBBS: Well, as you state, the President made a decision at the beginning of his administration to close the facility at Guantanamo Bay and to start a process of evaluating the detainees there in accordance with his solemn obligation to do all that he can to keep our country safe, to do it in a way that protects our men and women in uniform, and does so in accordance with our American values. That process, as you know, is ongoing.

In terms of the specifics related to Mr. Mohammed’s case, I would point you to the Department of Justice. But the President feels confident that the process that his administration has undertaken will yield results that keep us safer.

MR. GIBBS: I would point you to Matt over at Justice.

Well, in lieu of that, please allow me to present this story on Mohammed, which contains a timeline telling us all that is commonly known of him to date, including the fact that he was first “handed over to U.S. officials” in July 2002, then he was sent to Morocco for 18 months of torture, then to the “alleged” CIA-run ‘dark prison’ in Kabul, Afghanistan for five months and then to the Bagram airbase in Afghanistan for four months, then to Guantanamo in September 2004.

And after the British government called for his release in August 2007, he was recharged in May 2008 before (surprise! surprise!) all charges against him were dropped by the departing presidential administration in October 2008.

So basically, President Fighting The Global War On Terra! Terra! Terra! Now And Forever You Chicken Obama-Speech-Lovin’ Luburuuls had OVER SIX YEARS to make a case against this guy, and he and his pals couldn’t do it.

Anyone with even the faintest notions of anything approximating human decency knew that we had no legal alternative but to let Binyam Mohammed go.

And let us hope and pray that Mohammed does not, by some miracle, “pose a future danger to the country.” Because if he does (assuming he was a threat to begin with and we couldn’t make the case, or we ended up radicalizing him while in our custody), then we have only ourselves to blame.