Some Hope In The “Audacity” Of Russia’s Human Rights Struggle? 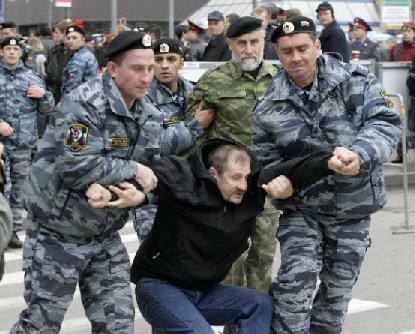 This post from The Weekly Standard presents a letter written by a number conservative “fellow travelers” urging President Obama to “focus on democracy and human rights when meeting with Russian President Dmitry Medvedev next week.”

I have to admit that it’s hard to find fault with such a gesture, but I must tell you that when I see anything in written form attributed to the likes of Max Boot, Robert Kagan and Danielle Pletka, among others of that ilk, the hair on the back of my neck instinctively stands up.

Also, I performed a cursory Google search to find out if these people made any such entreaties of Obama’s predecessor, and I could not locate anything (not saying it couldn’t have happened, only that it’s unlikely).

And speaking of Number 43, let’s review his own record on this score, which is decidedly mixed, at best.

This tells us that Dubya gave a speech in advance of a meeting with former president (now prime minister) Vladimir Putin about two years ago, in which he proclaimed that Democratic reforms in that country were “derailed” (another master-of-the-obvious moment). However, as noted here (from about that same time)…

“US support for civil society in Russia has never been more important,” said (Holly) Cartner (Europe and Central Asia director at Human Rights Watch). “The proposed cuts would generate trivial savings for the US, but it would be devastating to Russian civil society struggling for its survival.”

Rampant human rights abuses in Chechnya are another serious concern that should be at the top of Bush’s agenda next week. Torture by government forces, including pro-Moscow Chechen forces under the leadership of Chechen president Ramzan Kadyrov, is widespread and systematic. Enforced disappearances continue, with human rights groups estimating that between 3,000 and 5,000 people “disappeared” since the most recent conflict in Chechnya began in 1999.

In the last year, Russia has seen a rise in racism and xenophobia, encouraged at least in part by the racist rhetoric and policies of politicians. Just this month, police arrested more than 40 people following what they called coordinated attacks on minorities from the Caucasus and Central Asia. In October and November, the Russian government expelled more than 2,500 ethnic Georgians from Russia following a political row with the Georgian government. In August, residents of the northwestern Karelia Republic perpetrated a string of attacks against ethnic minorities in retaliation for the killing of two Russians by Chechens after a restaurant brawl.

And this tells us of what I personally would consider three developments that, to one degree or another, gave Russia the “green light” to invade Georgia last year (one was our silence in response to the murders of Russian journalists including Anna Politkovskaya; the first item in this post tells us that, though four individuals not directly responsible for her death were acquitted, their case will be retried – such is the murkiness of the case that her friends and family were satisfied with that verdict and wished to go after those directly responsible instead, but now the retrial will make that more difficult).

I’m not sure that, given our economic uncertainty and the commitments Obama faces that he inherited from Former President Highest Disapproval Rating In Gallup Poll History, he can persuade President Medvedev to initiate the reforms that Putin chose not to pursue. The signs noted here, though, are promising, and maybe Obama can find a way to build upon that, something that eluded both leaders’ predecessors.

(On an unrelated note, I should mention that, with the exception of a video or two, this will probably be the last post for a little while, at least through the holiday weekend; this will be happening sporadically through July, and there will be no posting at all for the week of the 13th.)