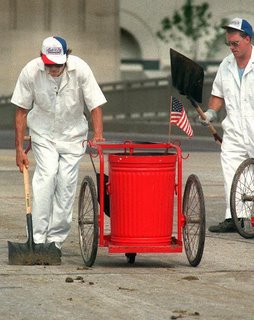 Jamal Rutledge, 17, was arrested by officer Franklin Foulks for a violation of juvenile probation in September 2014. While he was booking Rutledge, Foulks started to suffer a heart attack.

As the story tells us…

Officers passing by heard the noise (of Rutledge yelling and kicking the security fence to alert someone) and responded, administering CPR and using a defibrillator to electronically stimulate the officer’s heart.

Kudos to Rutledge – hopefully justice will be merciful to him and he’ll never be arrested again.

Paris, France Mayor Ann Hidalgo for this – about time somebody did this

I never thought I’d be giving a citation like this to Teahadist U.S. House Rep Renee Ellmers of North Carolina, but as of January, she definitely stood up to her party in the House when it tried to pass yet another typically ridiculous and restrictive anti-abortion bill here; she took her name off the list of co-sponsors and took away whatever thin veneer of legitimacy for this fraud that may have existed – the bill passed the House anyway and Obama quite rightly has pledged a veto, but Ellmers did the right thing here – maybe for reasons of political calculation, but she did the right thing all the same…and why is this a stupidly typical result?

I’ve honestly tried to steer clear thus far of all of the “deflate-gate” stuff surrounding this year’s Super Bowl between the New England Patriots and Seattle Seahawks (for anyone visiting from another planet, this involves the question of whether or not the Patriots let the air out of footballs during the playoff game with the Indianapolis Colts to try and gain some kind of competitive advantage), but as noted here, Patriots owner Robert Kraft demanded that the NFL apologize if no wrongdoing was found over the incident.

You know what? Just shut your damn pie hole and stop trying to play the pity card, you rich bastard. Because it’s not like the Patriots haven’t been busted over stuff like this before (see the whole “spying on the New York Jets” thing). And besides, “wrongdoing” was discovered, as we’ll find out later.

Jennifer Simon, the Oakland, CA mom trying to stand up to the anti-vaxxers here…

Staying with the Golden State, I give you San Rafael mayor Gary Phillips here, who compared the homeless to criminals (hope it’s not too harsh for me to hope that he experience it himself one day to find out just how wrong he is)

“Senator Honor and Virtue” for referring to those protesting the testimony of Henry Kissinger before a Senate committee as “low life scum” here (“Snitchens” didn’t exactly go out in a blaze of glory, condoning Number 43’s disastrous folly in Mesopotamia, but he wrote something in 2010 from here that was pretty spot-on in response)

Do-Gooder of the Year Nominees

Greyston (bakery) CEO owner Mike Brady of Yonkers, NY for hiring convicted felons, addicts and immigrants, including Dion Drew (who also gets a citation here) who “grew up in the projects and started selling drugs when he was 15, then bounced in and out of jail for nearly 20 years,” as the C&L post tells us here, though Drew is still trying to stay “on the right side of the law” (all the best to him)

In what has to be the single stupidest programming decision I’ve seen in a long, long time, MSNBC (and please tell me once more how “liberal” they are) pre-empted “All In” with Chris Hayes and Rachel Maddow on Friday January 30th from 8-10 PM EST and decided to air instead something called “Morning Joe In The Evening,” with two hours of Mika B. and Scarborough (along with fellow sycophant Mike Barnicle and others) parroting Republican Party talking points in prime time here.

Imagine Bill Orally and Maniac Megyn getting booted off one night for, say, Thom Hartmann and Alan Colmes (which of course would never happen since their audience would stage a riot).

Whoever was responsible for this at MSNBC should be fired on the spot.

Dr. Jack Wolfson is an Arizona cardiologist who apparently doesn’t believe in vaccinating his kids and, therefore, ended up exposing the 10-year-old son of Anna Jacks to the measles, which is bad enough, but by acting in his boneheaded manner, he also helped to expose Jacks’s 3-year-old daughter as well, who has leukemia and whose resistance has been ruined by chemotherapy (here – h/t Atrios).

And get a load of this quote from Wolfson (here)…

“If a child is so vulnerable like that, they shouldn’t be going out into society,” he said.

I give you the wingnut, Teahadist mindset on display, my fellow prisoners; may Wolfson experience one day something approximating the illness he helped to spread not just to Jacks’s children, but others as well.

Evan Leedy, 19, of Macomb Township, near Detroit Michigan – he’s a computer student from Wayne State University who launched an Internet crowd-funding site to gather more than $180,000 on behalf of Detroit resident James Robertson, who walks 21 miles to and from his factory job every day (here – nicely done)

Wingnut U.S. House Rep Mo Brooks, who said here that “illegal aliens” could be behind the Disneyland measles outbreak here (uh, no…that would be morons like you who, at best, equivocate on whether or not kids should get vaccinated in this country)

U.S. House Rep Aaron Schock, who voted here in February to defund public broadcasting but still managed to get a “Downton Abbey” redesign of his Capitol Hill office for free (typical for someone who thinks he’s entitled to such perks, I guess – Schock would end up resigning from Congress over this and other nonsense)

Dem U.S. House Rep Ted Deutsch, who tried unsuccessfully to get his colleagues to stop raising money for about 12 days in February here (an “A” for effort, though)

I’ll tell you what, Rep. Greene; if you have any doubt as to whether or not a state of unconsciousness makes one unable to file a charge of rape, here’s my idea…find someone to beat you senseless (assuming you have sense to begin with) to the point where you’re knocked out, and then awaken to find someone’s organ in one of your body cavities, and then you can determine whether that’s grounds to file a charge or not (an almost “Cosby-esque” line of defense – and it pains me to say that).

Larry Gatlin for this (what an assh*le)…

The “Nah, Sorry, But I Think We Do A Good Enough Job Of That On Our Own Without Any Help” Citation of the Year

Fix Noise, Steve Doocy in particular, worried that films such as “Frozen” would make fools of men, or something like that, here. 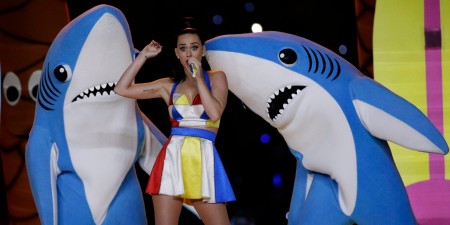 Katy Perry for this (I’m sorry, but what a no-talent ass…wonder if “left shark” will get a reality TV show out of this?)

Former Repug State Senator Tim Johnson of Mississippi for this; maybe a bit of political opportunism, but kudos for doing the right thing

Patrick Buono, a 61-year-old alleged man from Oregon, who was tried for “upskirting” a photo of a 13-year-old girl but was acquitted (thoroughly reluctantly by the judge) because (as we learn from the story)…

…there are no laws on the books preventing people from taking unauthorized pictures up the skirts of clothed women in public places.

Apparently what is at issue here is the lack of specificity in the statute as well as the fact that the girl was wearing underwear – if not, then it would have been easier to prosecute this cretin.

I’m sure there will be some further legislative action as a result of this, which (if it helps to ensure the privacy of minors who could be affected by such actions in the future) will be very welcome.

Joe Scar earns a dubious mention for saying that anyone in Congress who chose to boycott the speech by Israeli PM Benjamin Netanyahu was guilty of anti-Semitism (here – I really lose patience with anyone who gives Scarborough vastly undeserved props as some kind of a moderate).

I’ll tell you what – if Scarborough doesn’t accuse anyone protesting “Bibi” of ant-Semitism, then I won’t accuse any Republican who opposed a resolution honoring Pope Francis of anti-Catholicism. Do we have a deal?

This entry was posted on Sunday, November 29th, 2015 at 5:49 pm and is filed under Year-End Review. You can follow any responses to this entry through the RSS 2.0 feed. You can leave a response, or trackback from your own site.