Rousting Another Repug Ruse On The “Stim” (Updates) 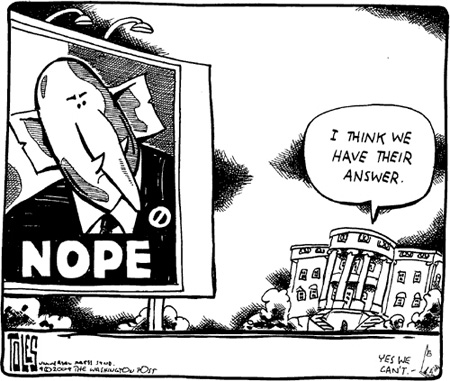 Uh oh, here comes another “Dems are doomed in 2010” story, highlighting our moribund economy (I would say that it’s too early to make blanket generalizations, though that will never stop our corporate media, of course)…

The longest and deepest downturn since the Great Depression has claimed 7.2 million jobs since it began in December 2007. Analysts figure 750,000 more jobs could disappear over the next six months.

If you add in people who have stopped looking for work, or who are working part time when they want a full-time job, the unemployment rate is a whopping 17 percent, according to the Labor Department.

“If you’ve got an effective unemployment rate of 17 percent and if this goes on for any length of time, a year or more, then everyone’s cushion will run out,” said Republican consultant Rich Galen. “There are going to be serious implications, culturally and politically.”

Galen said it’s understandable that Republicans would use the state of the economy to pound Obama and Democrats who control Congress. Still, “it’s not something we should either make fun of, be amused by or play politics with,” he said.

Oh, this is to laugh truly, my fellow prisoners (Update 10/13/09…and as far as the Repugs supposedly gaining ground, the only issue has to do with the Dems losing theirs, as noted here).

Seriously, has this man been living under a rock for the past six months or so? I ask that because his party has done NOTHING BUT THAT since President Obama was inaugurated!

I’m sure Repug U.S. House Rep Trent Franks of Arizona (who, as noted here, has flipped back and forth so many times on the question of Obama’s birth certificate that it’s a wonder he isn’t in traction) wasn’t “playing politics” when he told the lie about the stim funds for the rail from Disneyland to the Moonlight Bunny Ranch (here).

And I’m sure other Repug party members weren’t “playing politics” when they stripped pandemic preparedness funds from the “stim” here (just remember that as cases of H1N1 start piling up).

And I’m sure Repug Senators John Cornyn and Kay Bailey Hutchison weren’t “playing politics” with the economy when they voted against stim funds before they realized that they needed NASA funding and, at the last minute, decided that it should come from the stim here.

And I’m sure Repug U.S. House Reps John Mica and Don Young weren’t “playing politics” when, as McClatchy tells us here, they “touted projects” from the stim bill that they also opposed.

I guess this is to be expected from a partisan like Galen, I realize, who claimed here that former Repug presidential candidate Fred (Find My Pulse ’08) Thompson wasn’t dropping out in early January ’08 (which was true), though Grampa “Law And Order “ ended up bailing three weeks later after his microscopic vote total in South Carolina, as noted here.

And oh yeah, one of the Repugs making the most noise about the stim according to the story is a certain House Minority Leader, who, based on this, has to answer for his own antics as well.

Update 10/19/09: And how could I forget about this waste of space also (once again, no word on whether or not he ever found his flag lapel pin).

This entry was posted on Monday, October 12th, 2009 at 9:31 pm and is filed under Barack Obama, Congress, Pundit Ponderings (Bad), Stimulus. You can follow any responses to this entry through the RSS 2.0 feed. You can leave a response, or trackback from your own site.