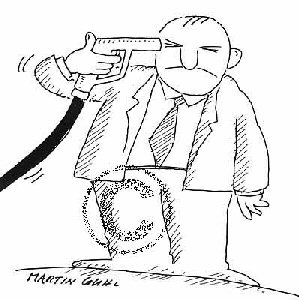 Given this story from last August, with the U.S. House Repugs calling their special session over the summer recess as a P.R. gesture to try and lower oil prices (and blaming the Dems in the process, of course), I wonder is Messrs. Hensarling, Shadegg, Boehner et al are actually going to give the Dems credit for this?

I know the answer, but I’m compelled to ask anyway.

Too Much Monkey Business

(Note: That was the title of a hit for Chuck Berry, but The Fab Four covered it, as they did with many Berry songs.)

It now looks like The Vatican, in addition to forgiving John Lennon for claiming that the Beatles were once “bigger than Jesus” (I mean, he only said it in 1966, and 42 years is like a fortnight to these guys), has now actually gone so far as to embrace the music of those four lovable mop-tops from Liverpool and their “unique and strange alchemy of sounds and words”.

As far as Rome is concerned, it’s nice to know that We Can Work It Out Like Dreamers Do, though I’d Love You To Ask Me Why it took so Long, Long, Long before you could Think For Yourself and see The Inner Light. And despite the Crying, Waiting, Hoping, let’s wish that the church decides to Let It Be, realizing Lennon and company are Not Guilty and It’s All Too Much, speaking Words of Love to make sure I’ll Cry Instead for Not a Second Time.

But then again, Tomorrow Never Knows.